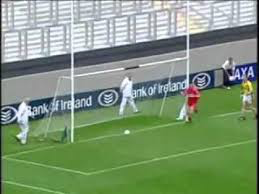 Most people watch sport to be entertained. While it has the power to bring communities together after a memorable last-minute victory, it’s also there to entertain the thousands of fans that regularly tune in to watch it. From Cork to Kilkenny, Gaelic football is entertaining supporters on a regular basis, with some of the game’s most talented individuals living long in the memories of those who have been lucky enough to see them in action.

Like in any sport, certain individuals have the ability to get people off their seats and create a wave of excitement as soon as they’re in full flow. While many people these days get their thrills from a sports-themed slot game or an exciting end to a Netflix show, witnessing a skilled individual captivate audiences and dominate certain matches is hard to beat. In fact, the most beautiful players to watch are the sort of talents that keep fans coming back and the sport thriving. Thankfully, over the years, fans of Gaelic football have been treated to some glorious performances from some of the game’s most talented individuals. We can’t cover them all, but let’s take a look at four players who have been a pleasure to watch in the sport. Some are playing now, while others retired a while ago.

An undoubted legend of the sport, Enda Muldoon has won a lot, from an Ulster Senior Football Championship and two National League titles with the county to Ulster Minor, Ulster Under 21 and All-Ireland Under-21 Football Championships. His ability was immense, with Muldoon widely being regarded as one of the best high-fielders in Gaelic football history. His passing ability was superb also, as well as his natural all-round talent for the game. He clearly lived and breathed football, and it was in evidence whenever you saw him in action. What a talent.

When you think of Dublin, Alan Brogan is name that typically springs to mind. Before deciding to hang up his boots in 2015, Brogan was a joy to watch and is widely regarded as being one of the best players of his generation. He did it all, such as being a three-time All-Ireland winner, but also had the skillset to wow audiences. His versatility in forward roles made him unique also, while his passion added even more to his all-round likability. Put simply, Alan Brogan will never be forgotten

Monaghan’s main man is still going strong in 2022, although at the age of 35, retirement could be around the corner. For now, though, the county’s top scorer in National Football League history is worth cherishing. A throwback to the old-fashioned full forwards of the game, McManus’ attacking ability is relentless, with his skill separating him out from many modern-day forwards. One performance that immediately springs to mind when thinking of him is the Ulster final against Donegal in 2015, where he was the undoubted star of the show after putting on a remarkable showing. From grit and toughness to skill and desire, Conor McManus has it all.

While many younger fans perhaps associate Pádraic Joyce with management these days, he was, in fact, a fantastic player in his day. Capable of turning his way out of trouble but also possessing the toughness needed to thrive in the sport, he was an integral part of a feared forward line, with his clear career highlight coming in the 1998 All-Ireland final, when Joyce made a name for himself with an iconic performance that ultimately led the Tribesmen to glory.