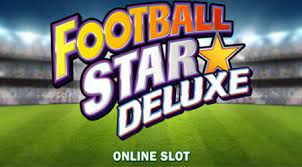 Online slots games are one of the most popular types of casino game there is, players love the simplicity of the game, as well as its fast pace and the chance to win some cash. Another great thing about slots is the many wonderful themes that these games have.

Slots players can find an array of slot providers who offer slot games with different themes on affiliate sites like Slotsource.ie. These games are inspired by a huge range of industries, from pop culture and movies to sports and music.

One theme that is very popular with slot players is football, these games are particularly popular around key times in the football calendar such as the World Cup and Premier League. If you’re a football fanatic with a love of online slots, here are just a few of the best slot games on the web worth playing:

If you love football-related games, the Football: Champions Cup slot game from NetEnt should be at the top of your to-play list. In this slot, you will choose your football team, participate in a free spins tournament and score goals to get coins.

The Return To Player percentage for this slot is 96.82% and the volatility is listed as being between mid to high level. This game is set within a large football stadium with a crowd that surrounds you and cheers you on throughout the game.

The bonus games come in the form of a penalty shootout and as you work your way through the rounds you gain the opportunity to receive free spins and once you reach the top there are other benefits.

Football: Champion Cup slots is a 5-reel, 3-row, 20-line game that is available on both iOS and Android devices and accessible through a number of the top slots and casino sites.

Shoot! Slots from Microgaming is the ideal game for slot players with an interest in the history of professional football. The symbols represent some of the biggest football icons of all time, including Maradona, Beckenbauer and Pele.

The two bonus games include the magazine bonus feature and the Free Spins Bonus, free spins come in groups of between 10 and 35 and are subject to a 2x multiplier. These great bonus features are one of the biggest highlights from the game.

Slot game developer Microgaming joined forces with Stormcraft Studios to release the slot game Football Star Deluxe. The game has  a multiplier trail up to 8x and offers free spins and wild features, including Striking Wilds and Super-Stacked Growing Wilds.

This game is great for both experienced slots players and those who are new to the game. It has 5 reels and has 88 pay lines and plenty of football references that appear throughout gameplay.

Around the same time that it released Football Star Deluxe, the developer also released football themed slots All Win FC with All41 Studios and 11 Champions with Gameburger Studios, the latter of which has high volatility with 5 reels and 20 paylines.

Themed around the 2018 World Cup tournament, Foxin’ Wins Football Fever contains the main character Mr Fox. This character is there to support you through the game and help you win.

The game screen is a large football stadium with a bright green grassy pitch. There are lots of different football references, including the reel symbols and a bonus feature that comes in the form of a referee fox.

There are five brightly coloured reels in this slot game and 25 paylines. Throughout the game you will also be offered up to 10 free spins.

Football Fever is a fun, simple and vibrant football themed slot from Saucify. It has 5 reels and a huge 243 different paylines, the payout percentage is pretty great too at 92.30%.

The characters in this slot are also inspired by the 2018 World Cup series. One of the best features that players like in this game is the free spin round that offers up to 10 free spins.

You and your opponent in the game each have three chances to get the football behind the goalie standing between you and the net. When you are lucky enough to get three or more special icons lined up on the reels, that is when you get to take part in the penalty series.

These are just a few of the best football slot games currently available online, new games are being released all of the time inspired by the popular sport. There are a number of different slots providers worth checking out, each have their own collection of games and welcome bonuses to attract you as a new player.